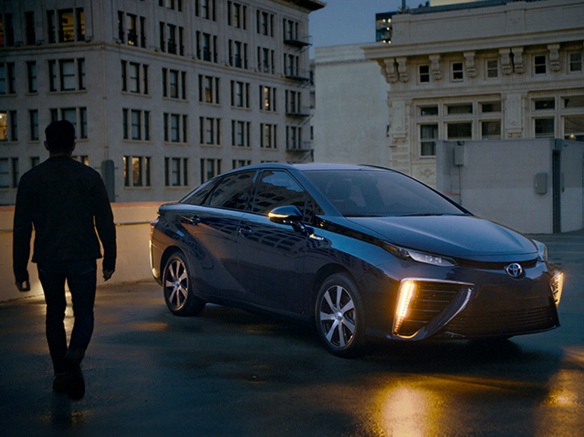 When people are thinking about “clean” cars, I suspect their minds picture hybrids, like the uniquely styled and long-established Toyota Prius. Or, they may be aware of pure EVs, such as the Nissan LEAF, and certainly Tesla’s glamorous suite of offerings. But who thinks about hydrogen fuel cell electric vehicles (FCEVs)?

The technology is not new. Toyota’s been working on it since 1992, and debuted their first concept FCEV in 2011. Mercedes-Benz has been experimenting with their “F-Cell” cars since 2002, and just introduced a new model for the German market. Honda offers a fuel-cell version of its Clarity. Hyundai recently brought out the all-new Nexo, its second fuel-cell car (after its fuel-cell version of the Tucson). It’s the only FCEV shaped like a crossover in the U.S. market, which seems like an advantage.

Most recently, I spent a week with a 2019 Toyota Mirai. See the full review in Clean Fleet Report.

The essence of a fuel-cell vehicle is that it doesn’t have a conventional engine. It processes compressed hydrogen fuel through a sophisticated device that creates electric energy by blending hydrogen fuel and oxygen to charge a battery and power one or more electric motors to move the car. Although the only byproduct is harmless water (H2O), the process of creating the fuel itself can be less “green.”

Although hydrogen fuel-cell electric vehicles are sold in other countries, in the U.S., most live in California. That’s supported by the California Fuel Cell Partnership, which has been slowly building out a network of stations. But once you cross the state line, you could be out of luck.

Bottom line? For someone who wants to have an environmental impact and is willing to put up some inconvenience, it can be a very satisfying choice.