I just returned last week from 12 days in London and Paris. The world’s eyes are on Paris now after the horrible terrorism that struck the French capital yesterday. I was walking those areas,– my hotel, and much of my wandering, were in the same part of town. It hurts me deeply to think of those beautiful streets being the scene of such an atrocity.

In this blog, though, it’s all about cars. When I was in Paris and London from October 27 to November 7, I saw lots and lots of small, fuel-efficient vehicles that never make it to American shores.

The argument for these smaller, more efficient vehicles across the pond has always been the high cost of fuel and also the old, narrow roads. Seems reasonable enough, but today, the world needs these cars, and some of them do find their way here. But a lot of them don’t.

Wouldn’t it be nice to be able to buy the VW Polo, or the cute little Audi A1 or BMW 1 Series hatchback that I saw on London streets? In Paris, it was nearly all French cars from Renault, Citroen and Peugeot. Seeing generations of these cute little cars zipping around was heartwarming.

In Paris, I found numerous installations of the Autolib system. 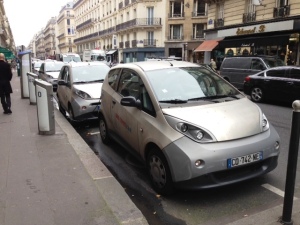 Like Zipcar, the Autolib vehicles are part of a car sharing system for members, who can claim them at the street and then drop them off at another Autolib location. What’s different is that they are all identical tiny, silver electric hatchbacks.

Here’s a closer look. Made from aluminum, they have a flat surface appearance–and not all of them were especially clean. But I saw them all over the place–charging and in motion.

I recently read about an American city, I believe Indianapolis, that was instituting an Autolib system. Read more about Autolib and car sharing.

Of course, in both London and Paris, we used the highly efficient public transit system–London’s Underground and Paris’ Metro trains. San Francisco’s Muni system and the Bay Area’s BART network can only dream of this kind of efficiency. We also sampled intercity trains in France, visiting Versailles, and the international Eurostar, which took us from London to Paris in a brisk two and a half hours!

One other note. I captured this all-electric Renault Kangoo at the Grand Trianon, part of the surprisingly extensive grounds of Versailles. Cute, huh?