Finally, the assembly line is running at the General Motors Orion Assembly Plant in Orion, Michigan, and Bolts are moving slowly down the line.

It’s an interesting experience in 2016, when instant gratification is the norm, to have to wait for anything. I knew that I wanted an EV, and I knew that the Bolt was the only realistic choice, since it’s (relatively) affordable and has a great range, with its big 60 kWh battery. So, I dashed down to place my order.

But nearly a month in, waiting feels as interminable as the conclusion of the 2016 election. While the latter event is literally right around the corner, I’m not sure when I’ll see my Bolt. And, I’m not sure exactly how much it’s going to cost me on a monthly basis.

Figuring that my car would be with me at least 30 months, I went for the nicer Premier model, with a few upgrades, like leather seats, and upgraded the stereo and safety features, so it’s $43,000 or so before they take the $7,500 off for the Federal tax credit. Then, there’s California money coming to me too, $2,500 worth, as I understand it. But I’ll have to decide how much to put down to keep those payments reasonable.

I’m also turning in my ancient 1993 Plymouth Voyager minivan, my occasional car that will now go to gas car heaven. I plan to put it out to pasture when I’m assured of my Bolt delivery date.

I haven’t bought myself a new car since November of 1990, when I got my Saturn. It was exciting to sell my Honda and buy a new car that was a brand new brand, too. I was the first guy on my block to have one, and I got some attention. I even got noticed by Hal Riney and Partners, who had the Saturn account, so I ended up on the cover of the 1994 Saturn brochures! 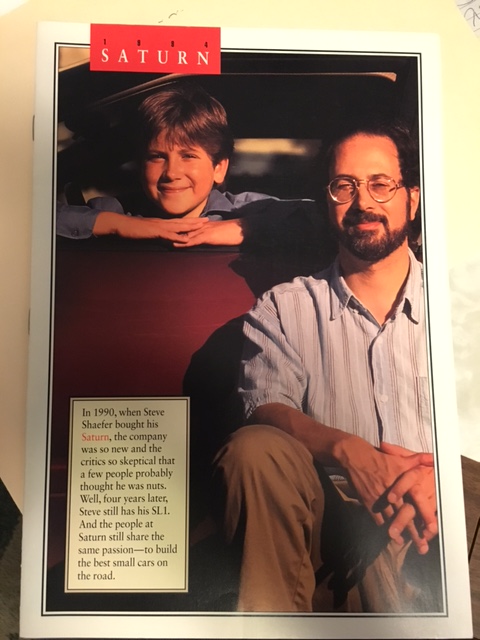 Look at all that nice dark hair. And I’m posing with my first son, who’s now a grownup father of two. 🙂

My Chevy salesman says he’ll keep me posted on the progress, so I will, at some point, know the status of the build and when it gets put onto a transporter truck for its western trip. Watch this space for updates.

And, visit my new venue, Clean Fleet Report, for my EV and hybrid writings.