Where did my concern about climate change come from? As a Climate Reality Leader, I need to know and share my reasons for taking action.

I initially thought that my awareness started with the first Earth Day, on April 22, 1970, near the end of my senior year of high school. However, with more thought, I realized that I didn’t really do much on Earth Day. I wore a black armband, which someone distributed, and, to my shame, removed it when threatened by a bully.

It was really in the 1970’s that the events and resources that grew out of that first teach-in awoke my planetary conscience. I learned about recycling and witnessed smog in San Francisco firsthand. I sat in shock and wonder on a rock in the center of San Francisco and viewed and assessed the massive layer of civilization that spread across everything except the distant hills and Mount Diablo.

I heard about Silent Spring (I think I read it but can’t remember now) and The Population Bomb and saw TV reports of rivers that caught fire in Ohio. I tried natural foods and made recipes using my copy of Frances Moore Lappe’s Diet for a Small Planet. I hugged trees and took long walks in Golden Gate Park (green, but not a wilderness).

Thinking about it, though, I wondered where my emotional start really came from. I thought about my encounters with nature as a child and a teenager, where I felt how human civilization was imposed on the planet, and how we were no longer living “naturally.”

In my first six years in Kenmore, a suburb of Buffalo, New York, I went to the park and saw trees and flowers in people’s yards, but I didn’t feel much connection to them. They were nice. I remember the tall trees I walked under on the way to my first-grade class in 1959, and the little flying seeds that fluttered down. I liked my grandparents’ grassy back yard, with the trees and flowers that grew there. I was more interested in my father’s sports cars. 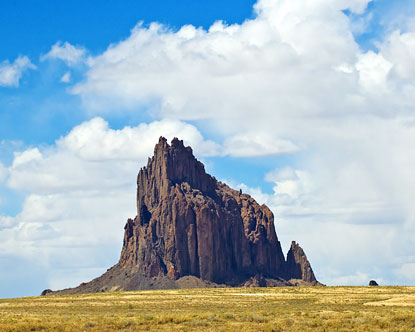 Then, we moved to Shiprock, New Mexico in 1960, in the middle of the school year. We plopped down in the desert, in a small town on the Navajo reservation. My father, a dentist, had joined the Public Health Service for an adventure and took my mother, my brothers, and me along.

It was very different from Buffalo. We lived in a small, one-story government-provided box, next to the new hospital where my dad looked after the Navajo people’s teeth. Our yard was dirt when we moved in and became an inappropriate lawn later; the surroundings were high desert. It was flat, and the famous landmark, the Shiprock, was visible through our front window.

Although we transplanted our suburban sensibilities there, with an air conditioner, Kool Aid, roller skates, and, eventually TV, we sometimes took trips in our car out into the desert and hiked around in our jeans, boots, and cowboy hats. We even had a horse for a while. I saw cactus, dry washes, hills, distant mountains, and desert wildlife, such as prairie dogs. And I heard silence.

Although I was just a kid, I remember the vastness, and the sense that we were a part of, but living apart from, the sand, rocks, and hardy desert vegetation. I don’t know how we would live out there without our modern conveniences, but apparently someone could.

We occasionally saw a traditional Hogan—a home made from wood and mud that the native people lived in before we rounded them up and put them in government housing. Some of the Navajos, including my friend Chester, lived across the street in Bureau of Indian Affairs (BIA) apartments that were not as nice as our very modest home. We didn’t study it in school, but I had a vague notion that people like the Navajos had once lived on the land. It wasn’t until I read Bury My Heart at Wounded Knee and took a Native American Anthropology class in college that I understood what had really happened.

In any case, within our hermetically-sealed house with its single window-mounted air conditioner we were protected from the heat, wind and dust—and bitter winter cold. There were also spectacular storms, with powerful lightning and thunder, and dramatic clouds and sunsets. It wasn’t much like Buffalo at all.

I grew carrots in the side yard of our house. I remember impatiently pulling them up when they were small, and they tasted great.

After two-and-a-half years in Shiprock, we were transferred back to civilization—Staten Island, New York. It was like Kenmore again, with streets, stores, buses, noise, and all the rest. I fell right back into the Midcentury American lifestyle, collecting baseball cards and picking up returnable glass bottles from the side of the road to claim deposit money at the corner store, where I bought gum.

We moved to Connecticut and lived there for two years. My main experiences of nature there were poison ivy (I went marching obliviously through the woods behind my house) and snow, in which I delivered the morning newspaper for one winter. I also enjoyed the beach in the summertime, but it was mostly the adjacent pool, tasty popcorn and candy, and amusement park rides that attracted me, not the sand or the waters of the Long Island Sound.

We were lucky to move to California in 1965, just after I turned 12. My next real experiences of nature came from joining the Boy Scouts in 1966. As a member of Troop 162, I got to camp and hike in the beautiful state and national parks. We had occasional weekend camp-outs, but the big thing was our annual summer camp. A few dads would drive us up to the woods and we would occupy a campground with members of other scout troops, doing crafts and sports, being gross, and taking day hikes. In the second year I went, I was selected to take a weeklong hiking and camping trip with a small group far away from camp and out in the open spaces.

It was a memorable adventure. We loaded up our packs with food and hiked 10 miles out. We camped that first night, and resumed our trip the next day, hiking another 10 miles and eventually arriving at a beautiful meadow. We lived there for four days, doing our own cooking and not seeing a single road, car, TV, or sign of modern life. I have photos of it somewhere.

We lived on our Bernard’s freeze-dried rations, canned meat, and pilot biscuits. We cooked over campfires and earned merit badges. The sky was black at night, and I could see why they called it the “Milky Way,” as countless stars spread across the darkness as we lay in our sleeping bags. That summer, there were abundant meteor showers, too, adding to the thrill.

On the last day, packs empty, we hiked the entire 20 miles back to camp, arriving tired but strong and healthy. As a suburban kid who stayed inside reading and listening to the radio, I had never done this before, and I felt powerful.

After a few days hanging around camp, we drove back to my suburban home in Concord. I stared at the linoleum and glass and plastic in my house. I felt the difference between the natural world and the artificial one that was “natural” to me. I knew something was out of whack.

Since then, I have lived in cities and in suburbs, and taken a hike or two. I have also read a lot and watched the gap between the natural world and the growing human construction grow. Now, billions of human beings and the civilization we’ve developed are changing the earth. Because most of us don’t feel a real connection to nature, we can blithely continue in our daily lives without giving it much thought. But we have to act if we want it to last.

I am taking action because I remember the desert of New Mexico and the California wilderness, and I want an inhabitable planet for my grandchildren.