Electric cars are becoming commonplace, but if you really want to sample the latest technology, drive a hydrogen-powered electric car. That’s what the Toyota Mirai is. Mirai, by the way, means “future” in Japanese.

I had a chance to spend an hour with a shiny white Mirai yesterday, and it was a very pleasant drive. In fact, it felt pretty much like a nicely turned out midsize luxury sedan.

But this is no ordinary car. It runs solely on electricity, but you don’t get the power by plugging it in. No–the power control unit, tucked under the prominent hood, controls energy from the fuel stack, which is located under the vehicle and manufactures electricity  chemically, like a battery.

Fuel cells are an interesting and complicated subject I won’t delve into here, but in essence, you put in hydrogen and generate electricity to run a motor. The only byproduct is water–H2O. There’s a button on the dash where you can release the accumulated water, which accumulates at about 1/3 cup per mile. Somehow, in my test, we forgot to use this feature, but the experts who guided me told me that the water is so pure you could drink it (but it’s not recommended).

The Mirai looks a bit ungainly in photographs, but in person it stands strong and proud, wearing Toyota’s latest styling, also seen on the all-new 2016 Prius. No one can accuse Toyota of being plain vanilla anymore. The most noticeable feature from the front is the large “gills,” which I’m told allow more air into the motor area for the fuel cell to stay cool. They are also a different look, and believe me, are more compelling in person. 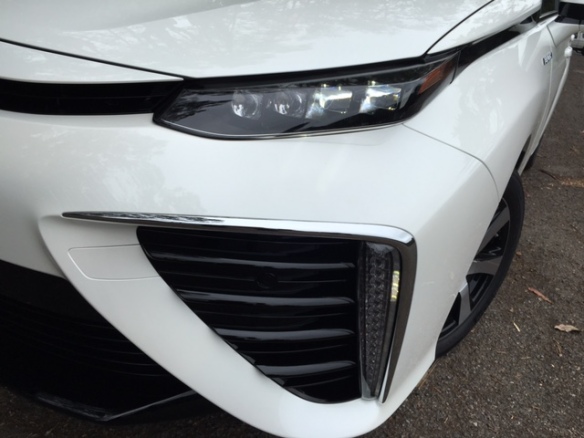 The roof has a pillarless, floating look, seen also on the Prius and on a few other cars today, so it’s definitely the latest style. The proportions are masculine in their mass but feminine in their roundness (forgive the stereotypes), but I think the car could appeal to a wide range of folks.

Inside, the Mirai is curves and edges intertwined, with a luxurious feel. The door slams with an authoritative thunk. I learned that the Mirai is assembled in the same plant as the extremely limited and expensive LFA supercar, in Japan, by craftsmen who sweat every detail. The seats feature a complex, compelling stitch pattern, likened to aliens by my guide. They’re covered in SofTex, an artificial but pleasantly pliable leatherlike material.

The instrument panel features the normal buttons and switches. The climate control uses the touch-sensitive sliders seen in a few other vehicles. Once you get used to them you can just tap to make adjustments. The steering wheel has the usual controls for accessories and speed control. The dash gives you lots of interesting information about how your Mirai is doing.

I peeked in the trunk. It’s tall and wide, but not as deep as a non-electric, since the hydrogen tank takes up a little room back there. No big deal, but you won’t pack any surfboards in there.

My ride was in the western area of San Francisco. I started up on 2nd Avenue and the car accelerated heartily, emitting just a slight whine. The sound is what you’d expect from an EV. I didn’t hear anything that sounded like a fuel cell, as it does its crucial work in silence, apparently. Brakes are nicely modulated, steering has a well weighted feel, and the car feels a lot like a Lexus, appropriate since it shares its platform with one. This is definitely much more car than a Camry or a Prius.

I wound through the San Francisco Presidio and down past Crissy Field, then climbed the steep Divisadero Street hill quietly and effortlessly. Then, I headed west again, returning to where I started, all too soon.

Hydrogen cars are likely to be part of the future automotive solution. If plug-in electric vehicles have a range problem, needing a recharge every 80-100 miles today (excepting Tesla), hydrogen cars have an infrastructure problem. They don’t have a range problem per se, with an EPA rating of 312 miles per tankful, but fueling stations are extremely scarce.

Toyota is investing in building up a network, working with companies such as First Element to set up stations throughout California. In the San Francisco Bay Area, there are a few, including one in Hayward, just a couple of miles from my home. I heard yesterday that there’s a station in Harris Ranch (near the Tesla supercharger) that allows San Francisco-to-Los Angeles trips, complete with a rest stop and a tasty meal. Toyota has 20 certified stations in California today.

An issue could arise if you took your Mirai out of state, away from hydrogen fuel and Mirai-certified service locations. Like driving a compressed natural gas (CNG) vehicle, fueling will be the issue. Take your other car to see Mount Rushmore.

How about if you have a mechanical issue with your Mirai? You must take it to a Mirai-certified Toyota dealership, which has the proper tools, service bays, and training to take care of the fuel cell. For ordinary things like brakes, you can go to any Toyota shop. There are eight certified Mirai dealerships in California–four in the north and four in the south.

So, what’s the price on this baby? I didn’t see an actual window sticker, but the retail is $57,500. However, consider this. You can buy or lease this car now. The current lease deal is $499/month for 36 months, 12,000 miles a year. Not only do you get California and Federal rebates, but Toyota is offering one of its own. And, as more than icing on the cake, Toyota will issue you a card good for up to $15,000 worth of fuel for the first three years. Service is included for that period too. So, lease the car and you essentially pay nothing but your lease payment for three years. Considering the competitors in the $57,000 range, such as Mercedes-Benz, BMW, and so on, it’s almost a steal.

Yes, as a Mirai driver you’ll have to think about refueling, and you may have to go out of your way. You can’t just pick up and drive to South Dakota on a whim. But, if you do have travel in mind, Toyota offers seven days a year of free rental of another vehicle. So, drop off your Mirai and take, say, a Highlander for a trip.

There are some questions. What will hydrogen cost when you DO have to start paying for it? Currently, it’s made primarily using natural gas, and costs $13-16 a kilogram. The tank holds 5.1 kg, so that’s $65-80 per fill-up. In three years, the cost could drop substantially.

Another issue is, just how environmentally friendly is hydrogen fuel if you need to use natural gas to make it? For now, natural gas is the easiest way, but there are numerous alternatives, including using waste to generate it. See the numerous videos on Youtube for much more information.

When Toyota introduced the Prius in 1996 in Japan (and 1999 in the U.S.), it was a bold venture, and the initial buyers were pioneers. Of course, those cars used regular gasoline, but still, it was a little bit of a risk. Now, in its fourth generation, on an all-new platform, the Prius leads the way in hybrids. Are you ready to be a pioneer, too? The Mirai is at the forefront. And, Toyota has opened its thousands of patents, so other manufacturers will be offering their own hydrogen fuel cell vehicles, helping to make the case for more fueling stations. It’s an  exciting time.