National Drive Electric Week is a nine-day celebration of the electric car. Now in its second decade, it grows annually, and spanning two weekends and the days between in the middle of September, offers EV enthusiasts a chance to meet and compare notes as well non-EV drivers a chance to look at, and sometimes even drive, the current crop of plug-ins outside of a dealership environment.

I attended the Cupertino, California event on Saturday, September 14–the first day of NDEW 2019. I brought my Chevrolet Bolt EV, which I’ve enjoyed–and showed–since I got it in January of 2017. With its three-year lease running out on 1/8/2020, it’s likely the last chance I’ll have to share it before switching to another EV next year.

The Cupertino event has a long history, and there is where you can still see some of what EVs used to be–labor-of-love science projects. I’ll talk about a few shortly.

EVs You Can Buy or Lease Now

With a bit smaller number of display cars than it was last time I attended, and a thin crowd, it was a little disappointing, but many of today’s pure EV options were there. I saw three Chevrolet Bolt EVs, including my own. A compelling new entry, the Hyundai Kona Electric (shown above), was there, sporting a white top over its jaunty blue-green.

The Kona, with a 258-mile range, is the next-best thing to a Tesla for range, and probably today’s best deal for range. This base model, at about $36,000, sat mere steps away from a 2019 Jaguar i-Pace, which starts about about twice that price. The Jaguar offers great style and luxury, and with 220 miles in the big battery and all-wheel-drive, has its own, different, buyer.

Nissan brought a new LEAF to show, and from its booth awarded prizes throughout the six-hour event. It was the one chance you had to ride in a car. Some NDEW events are more experience-oriented, but this one was more of a show and meet-up.

I saw a BMW i3 down at the far end, and a couple of Tesla Model 3s. Also nearby was a plug-in hybrid Ford Fusion, flanked by two Ford Focus electrics. These EVs, with just 76 miles of range, would make cheap used cars if you wanted a stealth EV.

At the other end was a Chrysler Pacifica plug-in hybrid. It’s actually a significant vehicle, since it’s the only PHEV minivan available in the U.S. Its 33 miles of electric range is plenty for local soccer practice shuttles and commuting. This one sported a little extra flair.

EVs are not just cars, of course. I saw some electric motorcycles and bicycles there, too, but as I stayed near my car much of the time, I didn’t spend time with them. I have ridden a few, and they are a fine option for some people under particular circumstances (good weather, short trip, no baggage, etc.). I did hear one motorcycle zoom past a few times with its electric whine. I’ve considered getting my motorcycle driver license just so I can test these in the future. 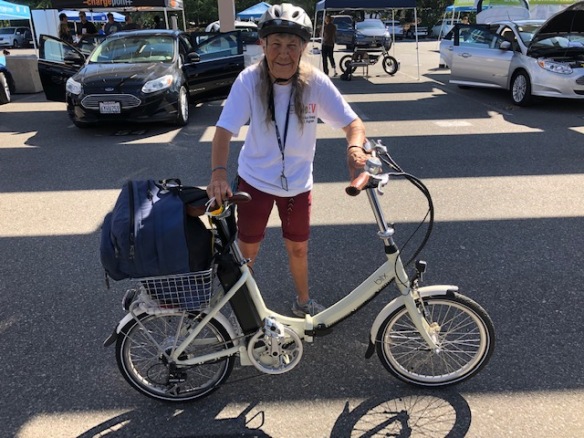 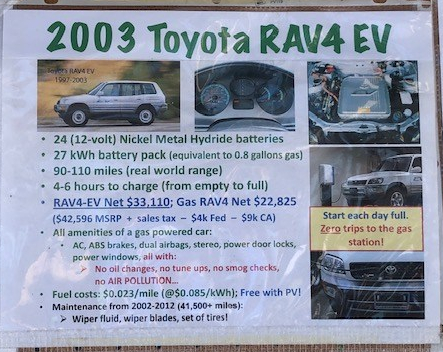 EVs have been available in major manufacturers’ showrooms since 2010, when the 2011 Nissan Leaf and Chevrolet Volt came out. But before that, besides the conversion projects, there were few. One model that had two representatives there at the show was the Toyota RAV4. Built just around the turn of the century, it put Toyota ahead of the crowd. Too bad they didn’t keep building them, because the RAV4 is a very popular body style now. You can get a new one as a hybrid today.

A pair of cute little Corbin Sparrows sat together. Not much more than shrouded motorcycles, these little pods would make perfect little errand-runners or last-mile transit connection vehicles. 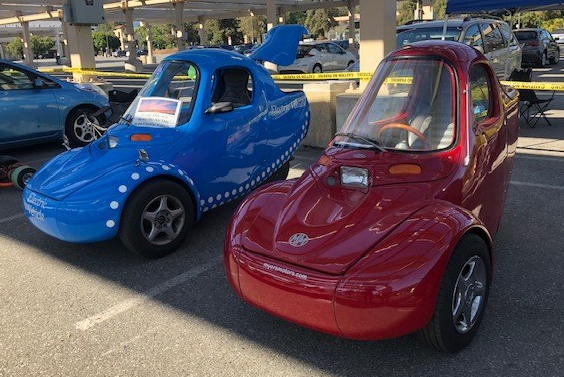 The tiny German 1993 City-EL weighs a mere 575 pounds and can shuttle one person for about 40 miles at up to 45 miles per hour. This one is nicknamed “Lemon Wedge.”

As long as there have been cars there have been tinkerers–people (mostly, but not exclusively, men) who enjoy a tough project. While some folks like to make a classic Mustang faster and louder, others enjoy electrifying an old gasoline car. The man displaying the Jaguar i-Pace had converted a Mazda Miata before.

I spent some quality time with George Stuckert, a retired engineer who also serves as secretary of the San Jose chapter of the Electric Auto Association. This group, a major sponsor of NDEW, was founded way back in 1967. They used to host a Cupertino event that was all project cars. George is glad that you can buy a new EV at a dealership today, but his pride and joy at this event was his 1996 Volkswagen Golf, which he converted ten years ago. It looks like an old Golf, but has a clever pinstriped design with a plug along the side (that I somehow managed to forget to photograph). It’s filled with electronic tech.

George proudly displayed a large card with photos of the project, and showed me his notebooks of carefully documented steps and the book that got him started.

It was not a smooth process, and included a few spectacular explosions, but he showed the grit and determination that’s what I admire about people willing to get their hands dirty and triumph over failure to ultimate success. The fact that you can buy a used 2015 VW e-Golf that is superior in every way to George’s car is completely missing the point.

In the front corner of the exhibit were two fascinating displays that, along with George’s Golf, gave a look at what a Cupertino Electric Auto Association event was like before the NDEW and mass market EVs. Bob Schneeveis, a local legend, showed off his two-wheeled inventions, including a prototype steam-powered bike.

Yes–you read that right. Although it’s not quite in the “drive it around the lot” stage, it is a beautiful piece. His electric motorcycle featured a fascinating front fork that made the ride soft and smooth. As a novelty, he had a “chariot” with a horse up front with “legs” made from brushes that capably gave rides to lucky attendees.

I enjoyed an extended conversation with Jerrold Kormin, who brought two displays: his converted Honda Insight and his prototype solar panel trailer. The former, besides swapping its engine for a motor and batteries, had new fiberglass nose and radically changed tail (and just one rear wheel). These design changes, per Kormin, gave the car a 15 percent improvement in its coefficient of drag.

The car was being charged by Kormin’s fascinating portable solar generator. The inventor’s goal is to replace dirty, noisy Diesel generators. He is renting his prototypes out now. One appeal of replacing Diesel, Kormin told me, was that companies can avoid the major inconvenience of refueling Diesel generators, which adds complexity and expense. He claims customers can save $500 a month in fuel costs with a solar generator working just a 40-hour week. The trailer folds up for easy towing and takes about 5-6 minutes to open up. Learn more at his website.

I met Joseph, an entrepreneur who was showing his Cirkit electric bike prototype. Looking clean and simple, it reminded me a bit of early minibikes, that you would assemble from a kit and the engine from your lawnmower! Click the link above to go to his website for more information. 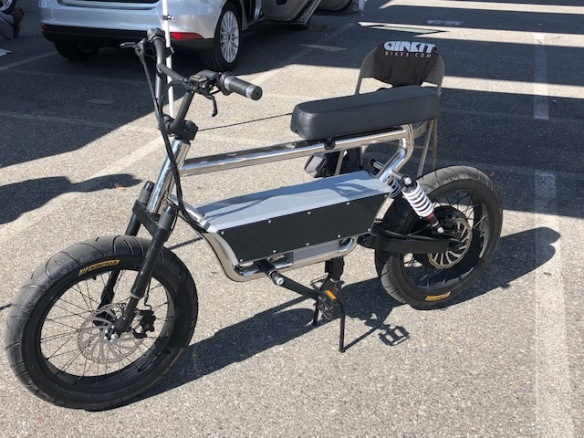 EVs need to be charged, which is why you’ll always find a friendly ChargePoint booth at EV shows. ChargePoint is a leader in chargers (I have one in my garage).

I also met Shane Sansen, the owner of DRIVEN EV. His company works directly with manufacturers to acquire their lease returns and sell or lease them directly to customers. A great idea, and one I’m considering for my next EV. You can learn more at their website.

Besides seeing the vehicles and booths, I had a chance to network with some other folks who are working on EVs and climate action. I met up with my friend Greg Bell, who told me about his exciting new job working with Home Energy Analytics. Offering the Home Intel program, Greg meets with homeowners and shows them how they can reduce their energy consumption and save money. It can be as simple as replacing incandescent bulbs with LED ones, or more. Find out more at their website.

So, having consumed 3-1/2 pints of water and all my snacks, I packed up and drove home. It was a good day.

You can attend an NDEW event in your area through Sunday, September 22. Check their website for details.