On a beautiful Spring day in Palo Alto this Saturday, April 14, EV owners offered test drives and showcased their vehicles to attendees of the 2018 Earth Day Festival in Palo Alto. The event was put on by Acterra, a Palo Alto-based group that brings people together to create local solutions for a healthy planet. As an Acterra EV Ambassador, I brought my Kinetic Blue Bolt EV, and was joined by owners of Nissan LEAFs, Volkswagen e-Golfs, BMW i3s, Fiat 500Es, Teslas, and other popular electric vehicles.

I was one of the folks who left their car parked, and had many interesting conversations, answering questions and demonstrating features of the car, while helping people understand how much fun it is to drive an EV, and how we deal with their few shortcomings.

My car (the Blue Bolt EV) was first in line of the staged vehicles, next to a VW e-Golf and Nissan LEAF–two direct competitors.

We owners had fun chatting when no visitors were around. Everyone has a story. The VW e-Golf next to my car was a late ’16, so the lease deal was amazing, after a significant down payment, just $75/month!. The white ’16 LEAF behind it, owned by my friend Greg, was purchased used, at a significant cost saving over a new one. And that’s a good example of how to get into EV driving without a huge initial outlay.

Not only were cars on display, but a number of them were also available for test drives, as seen by the orange Bolt, black BMW i3, and silver 2018 Leaf driving through the area in the photo below. This gave attendees a chance to get behind the wheel and viscerally sense the smooth, quick, quiet EV benefits. There were three Bolts available, as well as the two stationary ones, so we were well represented. 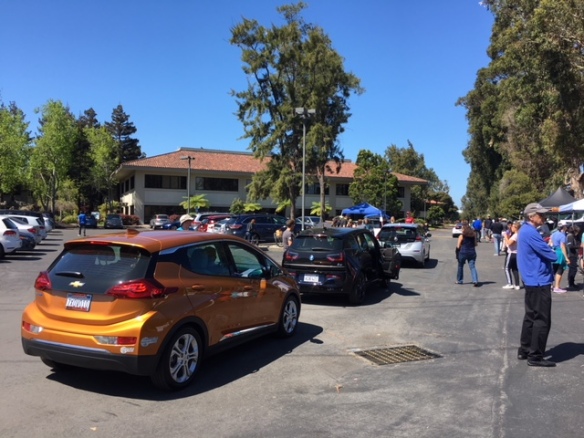 There were information booths, including Acterra, charger manufacturer ChargePoint, and the City of Palo Alto. I spoke with Hiromi Kelty, City of Palo Alto Utility Program Manager, who told me that 20% of Palo Altans drive EVs compared to 3% statewide. She also told me about the EV Charger Rebate that organizations in Palo Alto can receive when they install EV chargers – up to $30,000. For more information, go to cityofpaloalto.org/electricvehicle or call (650) 329-2241. 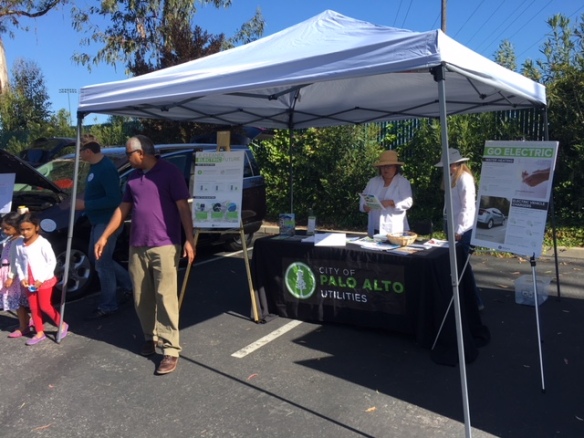 I showed my car to dozens of people, and had some interesting conversations. I allowed one 6-foot-5 man to adjust my seat, steering wheel, and mirrors to see if he fit in the car and could see if he was driving. The good news is that he did fit! The bad news is that it took a while to get my driving position back to normal. But I was glad to do it.

One man, who was sharing rides in his new Tesla Model 3, brought along a battery-powered skateboard. At $1,500, it an expensive toy, but could be useful for traveling between mass transit and your workplace, or for good clean fun. I declined a test ride.

When the session was over, around 1:30, we put away our signs, folded our tents, and drove our EVs home. It felt like a worthwhile experience. I only hope that someone we spoke with will decide to get their own EV.