Now nearly four weeks in to my electric car adventure with  Fidelio, the blue Fiat 500e, I’m really enjoying the smooth, powerful performance I get from him. Whether I’m zipping around town, accelerating onto the freeway, or climbing up the significant hills in my neighborhood, the little electric motor is more than up to the task.

Fascinating also is the way I can actually gain charge on a trip. Yesterday, I drove about four miles into Hayward, the next town over. The trip being mostly downhill or level, I ended up with a net range gain. I started with 46  on the range indicator and pulled into my destination with 51! Of course, I gave it back on the way home, but that’s the kind of numbers game you play when you’re driving an electric car today.

I keep coming back to the smooth, quiet experience I have every day commuting 18 miles each  way to work. I think the reason is that electric motors are much quieter, because they are so much simpler than gas engines. With just one moving part, the shaft, an electric motor creates virtually no vibration.The pistons of a gas engine move up and down, turning the crankshaft, which generates a lot of vibration and noise. That’s why there are engine mounts and mufflers. But you won’t find them in an electric car. 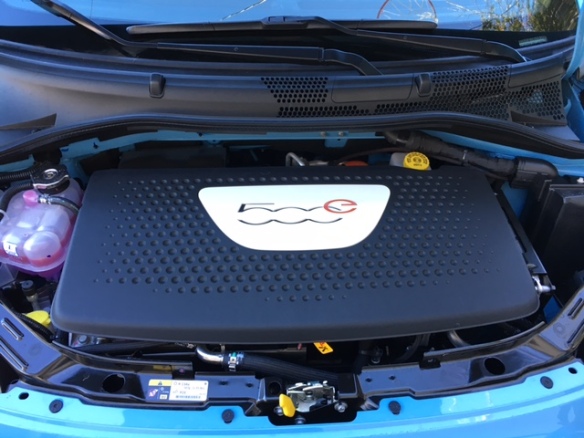 I’ll admit that with its shroud, wearing the same dot pattern you’ll find on the front, sides, and back of the 500e, you can’t see much in this photo, but notice that there’s no fan or radiator here!

I found a nice little comparison online that explains the differences between electric motors and gas engines, in brief. It also shows why electric cars are cheaper to operate and require much less maintenance. The real issue remains the range and charging time, and I believe that will be mitigated in the near future, with better batteries and quick charging.

The bottom line for today, though, is to plan, so you have enough charge available. Your car sits most of the time anyway, so just be sure it’s plugged in! According to the dash readout in Fidelio, recharging from yesterday’s jaunts was going to take about 11 hours using household 120 current. So what? I was in my house hanging out and sleeping.