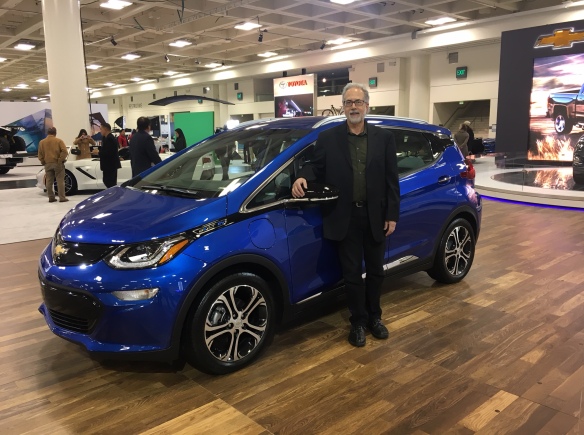 Finally, I’ve seen and touched a real Chevrolet Bolt! I got my chance at the San Francisco Auto Show, where they had a single car. And–it was the same Kinetic Blue that I’ve ordered mine in! And, as a Premier level model, it was essentially identical to my long anticipated new ride.

I approached it from the front, and it looked, well, like it was supposed to look. It’s not large, but it’s not small either, and stands tall–nearly as high as a crossover, but not as chunky. The smiling face had the fill panel with energetic lines on it and a big gold Chevy logo and gleamed in the show lights.

The paint looked lustrous and I ran my hands over the car, “petting” it, to get a true feel of the body. The chrome trim is not skimpy, and the roof rails are a gleaming silver. 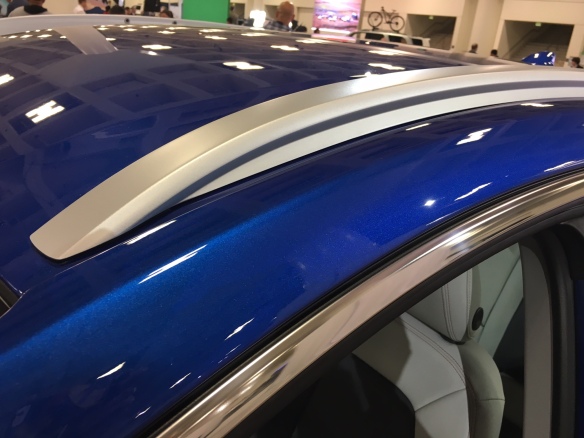 The taillamps are bold, with a sharp edge along their tops and the “electronic” theme pattern in them. The new logo is different from the Volt’s.

I popped the hood, which proved to be very lightweight, and used a prop rod. The flat, silvery motor is tucked in there, minus the usual radiator, water pump, and other internal-combustion-engine accouterments. There is still a container up front, but it looks like folks are being warned NOT to put radiator fluid in there. 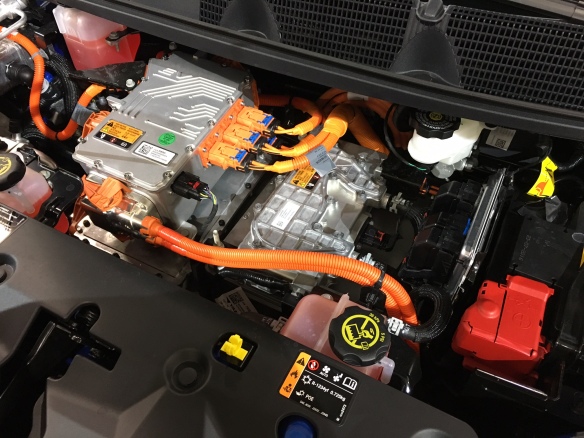 I stepped inside. It looked like the photos, but I also got the sense of height and the gray/white contrasts. I think this is the lighter interior scheme–the one I ordered–with partial white on the seats and a white lower half of the dash. The doors are dark, with just a little white extending into the top.

Plastics are good GM grade, but not Audi level luxury. We all understand that the premium pricing of the Bolt, for its size, is for the 900-pound battery, but the fittings seemed well done and similar to the all-new 2016 Volt, its plug-in hybrid sibling.

The instrument panel was totally blank, as today’s screens are, so I couldn’t evaluate it, or see anything on the center display either. The thick, leather-wrapped wheel feels good in your hands, and has the requisite redundant buttons for audio, info, phone, cruise control, and even a heated steering wheel. The rearview mirror is thick, as it also functions as a backup camera (when the car’s on).

The seats are narrow but nice and firm–perfect for 167-pound me. A large person might not take to them as well. The back bench sits higher than the front buckets, for good visibility but also leaving plenty of battery space below.

I tried sitting behind the driver’s seat that was set for me and had a couple of inches of legroom, so a Bolt should accommodate full sized folks back there.

The rear hatch wasn’t operational (they turn off all EV functions for these cars at shows, apparently), but we were able to drop the rear seats and see the space in back, including the sturdy “false floor” that provides a smooth surface and also hidden storage.

The car was just sitting there, without signage or hoopla, but two nice young women were there to answer questions, and we had a pleasant conversation. One of them took a few really nice photos of me with my beloved car. I also spoke with numerous other show goers who were interested, and that provided a sense of camaraderie. I expect I’ll be having more of these when I get mine, and I welcome that as a chance to sound the rallying cry of Go Green!

I should have some help in that, since the Bolt, this week, won three important awards. First, it’s the 2017 Motor Trend Car of the Year. It’s also named to the Car and Driver 10Best list, and is the Green Car of the Year, from Green Car Journal, announced at the Los Angeles Auto Show. An auspicious start.

Now, I’ll await word from Don Mays, my salesman at Boardwalk Chevrolet in Redwood City, California, that my car is built and on its way. He told me that delivery is expected before Christmas, so that’s about a month away. I’m eager to put it on the road to see what it can do.