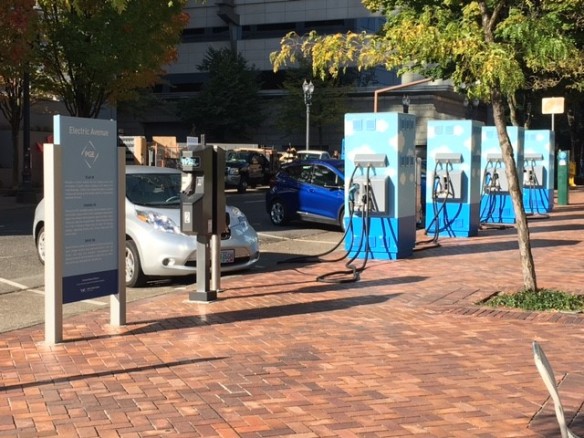 On a three-day trip to Portland, Oregon this week, I had a chance to witness some ways that the Rose City is moving toward a cleaner transportation future.

To start out, my trip into downtown from the airport was on the Trimet electric train system. The Trimet Max Red Line docks steps away from the baggage claim area, and for $2.50, you can sit in a clean, comfortable chair and look out the picture windows at the Oregon scenery. It was clear and beautiful my first day, but, naturally, became gray and rainy later. But that was pretty nice looking (and smelling) too.

Once I stepped off the train onto the street, I walked the several blocks to my company’s Portland office. Along the way, I passed four things that told me that Portland is working hard on going green.

I walked past the Forth Mobility showroom. Forth is set up to give people a chance to learn about and test drive electric vehicles, including the Nissan Leaf and Chevrolet Bolt. On my way out of town, I dropped in and chatted with Sergio, who showed me the displays, which included a sample of wall-mount charging stations and a screen folks can use to determine which EV would work best for them.

A couple of blocks further, I spotted Electric Avenue (see photo, above). This brightly painted spot at PGE (Portland General Electric) headquarters, sports six charging stations–Level 2 and Level 3. Located near Forth, it’s a good one-two punch for EV awareness and use.

Along the tree-lined streets, which were beginning to display some autumn-colored leaves on the ground, I spotted two ways to drive around without owning your own car. ReachNow is BMW’s car-sharing service. I saw the logo on the sides of Minis and BMWs wherever I went.

Tucked into other spots were the Car2Go vehicles, which feature cars from BMW’s German rival–Mercedes-Benz. I spotted numerous Smart EVs, along with the smaller Mercedes-Benz crossovers and sedans.

In 10 minutes and six short blocks, I got a sample of Portland’s efforts to reduce traffic and greenhouse gases.

On my first night in the city, I rode in a car on the way to my old friend’s home in suburban Gresham, and there was lots of traffic. These efforts in Portland should help congestion, as well.

To top off my trip, on my return to the East Bay, I rode BART’s airport shuttle and the regular BART line most of the way home. The electric vehicle future is now.